What Got You Into Long Distance Bicycle Touring?

Dear Warmshowers Community, we know this is a time of concern for everyone around the globe due to the COVID-19 pandemic.  In an effort to streamline communication and better address the current needs of our community in a timely manner, we are temporarily disabling the forums and directing everyone to the Warmshowers Facebook Group. This will allow the Warmshowers Community a centralized place for comments, questions, and concerns related to touring and hosting. As always, we ask that you follow our community guidelines when posting.

What Got You Into Long Distance Bicycle Touring?

What Got You Into Long Distance Bicycle Touring?
By Frosty Wooldridge

“All you do is twist the throttle and watch the scenery go by,” the cyclist said. “When you ride a bicycle, you become the adventure.”

Back in my twenties, I taught school in Denver, Colorado. With three months off in the summer, I revved up my motorcycle for a magnificent adventure to Alaska. When I twisted the throttle from Dawson City, Yukon Territory to ride over the “Top of the World Highway”, I stopped to talk to two bicyclists who had pedaled from San Francisco to Alaska. They just got back to the road from climbing a small mountain.

“What the heck are you guys doing?” I asked.
“We wanted to get a better view of the terrain of the Arctic Circle,” one of them said.
“Man, you guys are gutsy,” I said.
“Well, think about it,” one of them said. “All you do is turn the throttle and watch the scenery fly by.”
“Yeah, but it’s fun,” I said.
“Maybe,” he said. “But we ‘become’ the adventure…ah, but you wouldn’t understand it unless you tried it.”

That stuck with me, so the next year in 1975, I bought a touring bike. I tried to get some buddies to ride with me.

“You’re crazy man,” they said. “That’s the dumbest and most dangerous idea yet. You could get killed.”

Nonetheless, I took the train out to Los Angeles to Manhattan Beach. I dipped a small plastic vial into the Pacific Ocean and dipped my back wheel into the surf. I headed east into the rising sun. After battling traffic for two days, I finally broke free into the Mojave Desert. Within 10 days, a ‘treble hook’ (fish hook) ‘set’ itself into my soul. One night under the stars with the campfire blazing, I muttered to myself, “Man, I love this touring.” Two months later, I filled another plastic vial with the Atlantic Ocean water. It sits on my “memory shelf” to this day.

From that moment in the summer of 1975 onward in the past 41 years, I’ve bicycled 11 times across the USA and over 150,000 miles across six continents. I love it to the core of my being. I can’t wait to get up each morning to pedal over mountains, through deserts, into rain forests and into unknown countries, cultures and languages. I’ve suffered crotch rot, dehydration, dog attacks, miserable weather, sore feet and nasty rashes. I’ve endured the Inca Two step and Himalayan bowel chaos. I’ve eaten foods all over the planet. I’ve met amazing people and enjoyed stunning sunsets, rainbows and animal life. I’ve even bicycled and camped in Antarctica. Finally, over 20,000 pictures and their memories enrich my life beyond measure.

Whatever drives my passion to bicycle tour, I am thankful for the spark afforded me by those two guys in Alaska so many decades ago. They profoundly changed my life.

What about you? What got you into bicycle touring and where has it taken you? Frosty Wooldridge, long distance bicycle traveler, Avenue of the Giants, sun rays coming through the redwoods, morning mist, magic of bicycle travel, West Coast Route 101 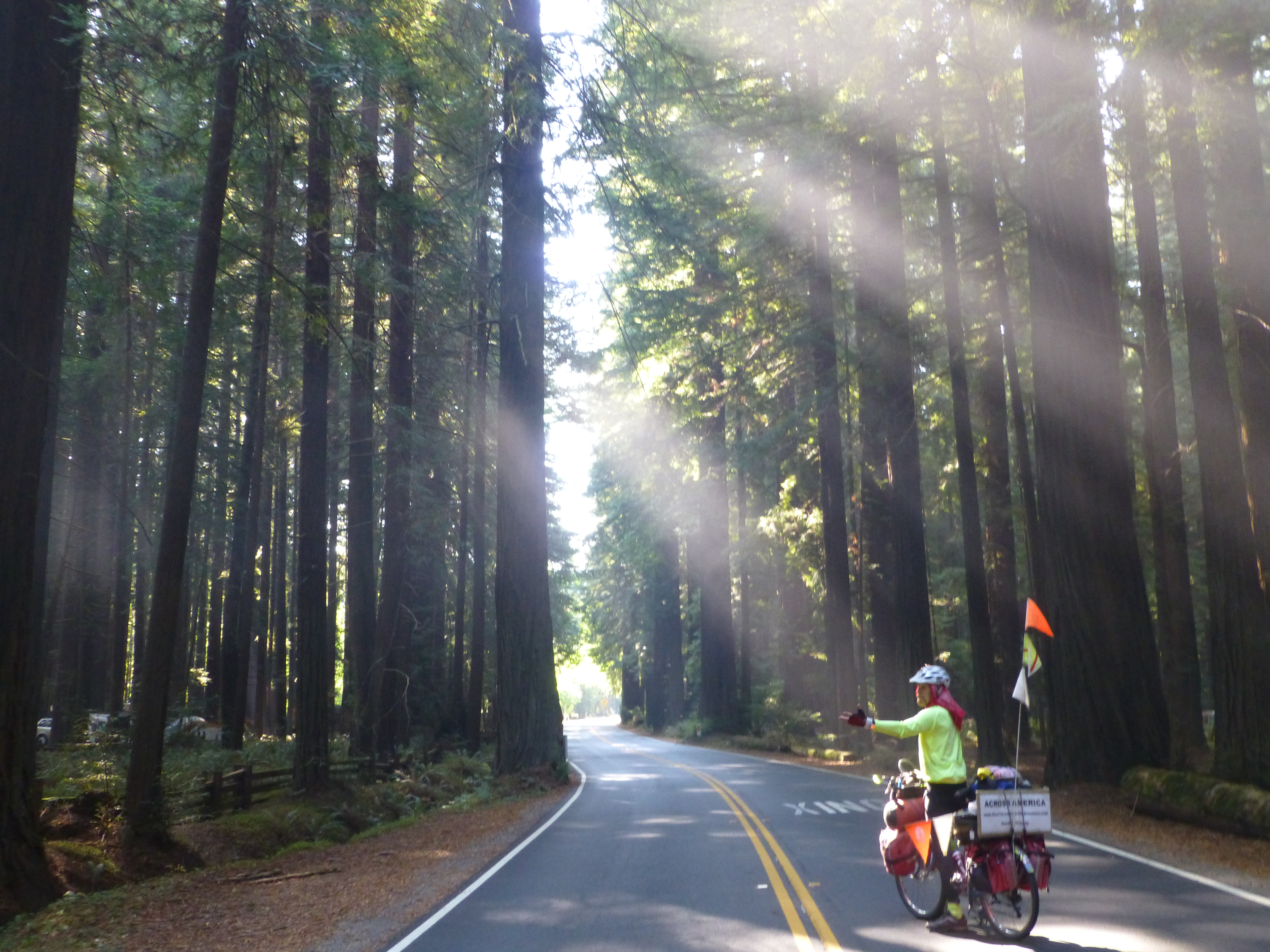